(This is a short rendition of my Mother’s travels from Austria to Canada as a young girl.  It was written in collaboration with my Mother for the Halifax museum for immigrants who arrived there on the Groote Beer Ship.)

The OCEAN CROSSING on the GROOTE BEER – Ingeborg Bridge

9 years old, that’s how old I was, when my life changed forever and I started my journey from Vienna, Austria to Windsor, Ontario, Canada. It was 1952, when I first learned that my parents had decided to move closer to my Mom’s twin sister in Canada, she had moved there a year earlier saying that ‘the streets were paved with gold.’ It took some convincing, as our lives in Austria were going ok, despite all the difficulties after the war, but my Mom really wanted to go and she, eventually, convinced my Dad that it would be a good move for us.

So, we started our journey with trains through Europe towards Rotterdam, Holland. We didn’t have a ticket for the ship, but we had heard that people cancel and that you can get on a ship last-minute – kinda like stand by on planes now-a-days. We were fortunate to have some family just outside of Rotterdam, where we were able to stay, so when we arrived, we went straight there and waited for a few weeks before a slot came free on the Groote Beer ship. My time in Holland was not wasted, I really liked it there, as the language was easy for me to understand, it was quite similar to the German I spoke and I went to school and the family I stayed with had a girl about my age who I could play with.

When the time came on September 22, 1952 it was a dreary, dull, chilly day and my Aunt was the only one from the family we stayed with, who saw us off. The day I left, the one memory, which really sticks out for me, is when my Aunt, I stayed with, had bought me a walking doll, I’d never had such a beautiful porcelain doll, she had real red hair and a blue dress. So, we boarded the ship in Rotterdam and started our big journey to this place called, Canada. I had only heard about it through my parents and had very little idea of what it was like or where we were going to or, even, how long it would take to get there. Still, so far, the adventure had been great and it didn’t stop there. My time on the Groote Beer was full of fond memories of playing with the crew and, the few, other kids that weren’t sea sick, as it was a very turbulent crossing.

When we boarded, my Dad was separated from us and had to sleep with men only, so he had his own bunk in a room with several other men. We would meet at meal times or on deck. My Mom and I shared a bunk with several other women in the same room. I didn’t mind, as it was something I had never experienced before, so it was all so new and exciting. The beds were 3 tier and they were like in war pictures – white beds and metal; like hospital beds.

Our crossing was very rough, but I was lucky, I don’t get seasick. When the ship was in rough seas, the kids and I were in the dining room, rocking back and forth across the room with the movement of the ship. There were no adults there, just us kids having a fun time in this great big room where we were able to play.

We had only one good day and that was the only day my parents came up on deck because the sun came out and it was so calm. Photos were taken by a professional photographer that day, which are at the bottom of this post. Otherwise, my parents were both seasick, basically hanging over the edge of their bunks – green.

The crossing took a week direct from Rotterdam to Halifax arriving there September 30, 1952.

Upon arrival in Canada, things turned for the worse. We arrived in Halifax, Nova Scotia, but we didn’t even touch Canadian soil, we were shuffled straight over a railway bridge to the trains and there boarded the slowest and oldest trains compared to faster trains in Europe at that time. We didn’t have sleeping compartments, we slept in the chairs, which didn’t recline; it was more like wooden benches. We were used to Europe second class trains with upholstered seats. By the time we had reached Windsor, we were exhausted and didn’t have such a great impression of my new home country. They all spoke a language I couldn’t understand and Windsor was nothing like Vienna. I think my parents were very disappointed as well, but they had plans to go out West, when they managed to get enough money together. It cost us everything we had to get to Windsor, so our trip to move to the West of Canada was put on hold.

My Mother was the only one who could speak any English, as she had worked as a chambermaid in a Villa on the island of Guernsey, UK, before the war broke out, so times were tough for us when we arrived. We moved in with my Mother’s twins’ sister where we lived upstairs and shared the kitchen, bathroom and living room, with them, downstairs. It was a full house, but I did have some cousins to play with, but my parents fought a lot. Unlike what had been written to us by my Mom’s twin, there were no jobs and my parents struggled to find work and it took us a few years before we could get a home of our own and, then, we bought a land and my Father built our first house.

School in Canada was hard for me because I did not speak any English. They didn’t have programs like today, where they help kids with English as a second language. I was 9 and they put me into Grade one – I should have been in Grade four, this had long-lasting impact on my self-esteem and hindered my education. The kids were mean and ridiculed me and on my first day of school I curtsied to my teacher and she laughed and so, I made a strong effort to learn English and make sure I lost my accent. The only kids, who were my friends, were outsiders like me – a midget, a little black girl, etc. I did catch up 2 years of my schooling over the years, but I never managed to catch up the third one. I was 18 in Grade 12, rather than the usual 17-year-old.

So my first impressions of Canada were not great, but they changed. While I lived with my parents, we never managed to make enough money to move to the Western part of Canada, which was more like our homeland. I grew up and we moved to London, Ontario, where I went to high school and met my high school sweet heart and married him. His idea of impressing me, when we first met, was to do a cannon ball into 3 feet of water! He has always been one to make me laugh to this day, as we are now married 53 years. We had our first child in London, Ontario, my husband worked in Detroit, so we moved back to Windsor for a short spell.

Never giving up on the hope of moving West, we went on a trip there and fell in love with this beautiful place called Vancouver and all of BC and decided this was for us. At the time we said we would be back within 5 years, we were back within a year, as my husband’s company closed in Detroit. We headed west with a U-Haul trailer with a few of our belongings and $500.00 in search for a job and new home. We left our son with our parents for a short time until we were settled. Moving to this province was a choice we have never regretted.

Soon my next child, a girl was born and our little family was complete. My parents, finally, realized their dream to move west and moved out soon after the birth of our daughter. My husband went on to be a very successful business/salesman in the peat/fertilizer business and I went on to finish my high school degree, get my travel agents license (travel has always been a passion of mine) and started my own travel agency in the Okanagan, which was, also, very successful.

My son now lives close to us in the Okanagan working in a marina and as a Ferrier – has given us our 2 lovely grandchildren. My daughter went off to follow a career as an entertainer in England, UK. We are now retired and still traveling, which has been a large part of our lives and so continues. My start in Canada was not the easiest, but I now see this country as my home and have been very lucky to have made that great crossing so many years ago.

Photos from the trip: 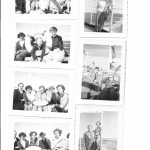 Inge and family on the Groote Beer Ship 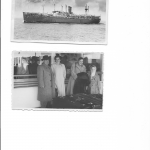