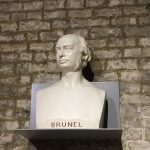 Yip, that ‘ is correct there were 2 Brunels involved in the creation of this tunnel. The only monument to have both father and son work together.

Sadly, you can’t go into the actual tunnel, well you can, but you don’t realize that is what you are doing. It’s now used to connect Rotherhithe and Wapping on the East London line. , you may have been through this amazing architecture and never As a result, you are likely to have gone through it and never knew it! 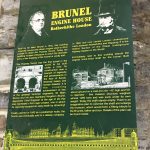 Details of the museum building

This tunnel set these men up as Victorian marvels of architecture by doing something that had never been done before – build a tunnel underwater, that still stands today. Sadly, there was loss of life to build it – Brunel senior almost lost Brunel, junior. When there was a collapse of the tunnel Brunel Jr was trapped by a fallen beam, managed to free himself, but then the rushing water carried him up the tunnel shaft to safety. 6 of his co-workers were not so lucky.

After this major leakage, the public lost faith in the tunnel and it started to lose funding. So, Brunel Jr planned a big banquet, inviting all the great – including the Duke of Wellington (Prime Minister). This stunt helped restore faith and finances to help create this amazing architecture! 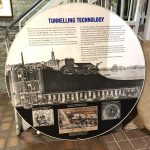 This showed Brunel Jr anything could be done and he went onto build: Clifton Suspension Bridge, Great Western Railway, Paddington Station, Great Eastern steamship and many other engineering feats. 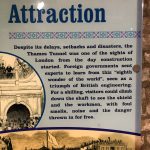 8th Wonder of the World

It’s run by volunteers and runs on donations.

Cabaret nights details can be found by clicking here.