The Titanic Museum in Belfast is cursed

After a visit to Dublin with my in-laws we went on to Belfast for a few days to bring in the New Year in fine style. Well, that was the plan. Instead I was left pondering is the Titanic Museum in Belfast cursed?

In 2013 my in-laws came and stayed with us in England for a few weeks. We decided to visit Ireland going to Dublin and then on to Belfast. Dublin was brilliant and we had a great time  with Celtic dancing, lots of Guinness and visiting the main sights my in-laws wanted to see. After a few days in Dublin we took a bus to Belfast which is only a few hours away enjoying the scenery. The next day we did a tour to visit the Giant’s Causeway.

On New Years Eve our luck changed. The morning started well we were in a lovely hotel and had a great breakfast. Then the day went pear-shaped. We decided to do a hop on hop off bus trip around the city to orientate ourselves. Regretfully, we choose the wrong hop on hop off bus tour in the morning around Belfast. It was decidedly mediocre. I had booked it thinking it was the one on trip advisor that was ranked higher. The weather got worse by the time we arrived at the museum with drizzly rain although we did manage a lovely walk along the docks to the Titanic Museum. Before we toured the museum we had lunch in the museum restaurant. The servings were obviously for leprechaun’s judging by the sizes. The poor girl serving saw my look of despair and while her manager was not looking gave me an extra helping of potatoes.

After lunch I went to get the tickets while the others wandered around the souvenir shop. Within 15 minutes our visit changed dramatically. My mother-in-law Inga slipped on the back steps of the Titanic Museum taking a photo. The result was she broke her shoulder in two places. 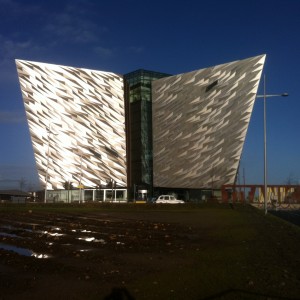 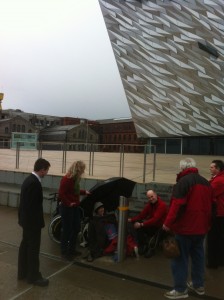 The fall out the back of the Museum 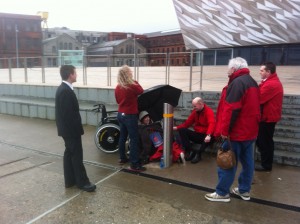 Waiting for the ambulance 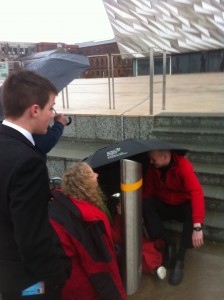 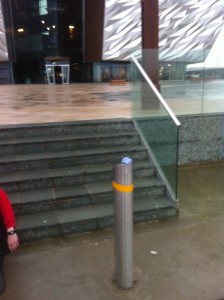 How she fell, one side had a hand rail the other did not 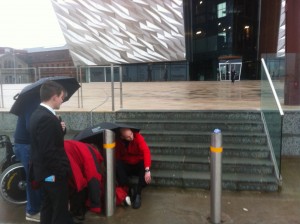 Think Faulty Towers and you get the picture of how  well-trained the staff were in first aid. First if my wife Debbie had not been there they would have tried to move her into a wheelchair. Even I know from my 101 medical first aid training you do not move someone who falls down steps until you ascertain they have not injured their spine or neck. I understand it was raining and cold. However,  there are worse things than being wet and cold, such as being in a wheel chair for the rest of your life.

I had to suggest to the staff they get some umbrellas and foil blankets to keep the rain off her and to generate some warmth. They then had the nerve to suggest it was my mother-in-laws fault and that we were not technically on the Titanic Museum land. I think there is a time and a place to discuss these things and not when someone is sprawled and injured at the bottom of steps in agony. Within quarter of an hour a car arrived for a medic to assess the situation and then 10 minutes later an ambulance arrived after I rang 911 again. The museum staff had first rung and not explained the seriousness of the accident and so they had sent a car to assess the situation.

After the accident the museum did ring me a couple of times but failed to follow-up. I pointed out that their were CTV cameras at the back of the museum where we could see the accident. Mysteriously all the footage disappeared. The stairs at the back of the museum only had a handrail on one side and I still do not know if they have installed handrails on both sides. If you are visiting do let me know and send a photo. Overall I would not want to have an accident at the Titanic Museum. We visited a few days later and their auditorium is also an accident waiting to happen with steep steps which young children and elderly people have to be careful navigate down.

The NHS gets a lot of criticism, but not from me for this accident. One word, brilliant. All the staff from the ambulance drivers, nurses, doctors, radiologists, receptionists were excellent and professional at all times. They saw my mother-in-law quickly on New Years Eve and handled her allergic reaction to the morphine very well in that they got her heart going again! She was kept in overnight and offered surgery there but we decided it was better to get back to Canada where we were able to do in due course. Both my in-laws were confused about not having to pay for anything and even though we explained it several times that no payment was required as it had been an accident. Inga spent overnight at the Royal hospital in Belfast. The next day we spent the day at our hotel who were also brilliant and even lent us a wheelchair.

We stayed at the Holiday Inn Belfast in the city centre and the staff were excellent. I was really impressed with how the hotel handled the whole disaster on New Years Eve. They found a wheel chair and helped out in organising a car to the airport as well as being sympathetic.

Inga and Joe my in-laws managed to get back to Canada within a few weeks on the Air Canada flight from hell. The ground staff lied to us about the seats we had reserved and they were given atrocious service throughout the flight. It was only from Calgary to Kelowna that things improved. The Titanic Museum were next to useless although they kept up the Titanic tradition when faced with a problem they ignored it. Inga had surgery in Canada and now has more metal in her arm than the six million dollar man and will not be doing the shot put anytime soon. 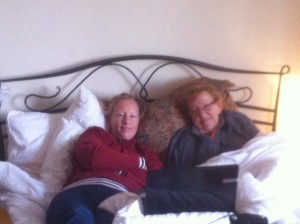 Recovering at home in Hove 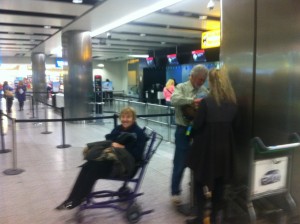 The flight from hell with Air Canada

0 thoughts on “The Titanic Museum in Belfast is cursed”