An idiots guide to visiting Fatehpur Sikri near Agra

After seeing the Taj Mahal and Agra Fort we learnt of the existence of an old Indian capital a 45 minute drive from Agra. Akbar was the first Mughal ruler of India and built Fatehphur Sikri. We decided since we had an extra day in Agra to visit to the first ancient capital of India. We were staying at the Gateway Hotel in Agra and they organised us a guide and car for the day.

Our guide was a history graduate called Pradeep and he knew his stuff. After a 45 minute drive we got to Fatehpur Sikri. It was a magnificent site to visit. I can see why it has UNESCO World heritage status. Akbar built an impressive structure from the fortress wall, palace and mosque to the biggest gate in the world Buland Darwaza or the Gate of Magnificence was built in 1601 to commemorate a victory. Inside the mosque is also the white Tomb of Sheikh Salim Chisti. My favourite place was the tower Hiran Mirar a memorial to Akbar’s favourite elephant. The elephant executed people who disobeyed or displeased Akbar. Overall the visit to Fatehpur Sikri is a great day out and worth doing if you have a few days in Agra. I decided to write an idiots guide to visiting Fatepur Sikri near Agra for other travellers.

First thing you need to prepare yourself for on arrival at the site is that you leave the car at a car park. By government edict you have to walk or take a mini bus to the site, it cost 10 rupees each way and takes a few minutes to get there. After you visit the Government run site Palace you then visit the non-government site with beggars and vendors eager to sell you their trinkets. Here is where Pradeep our guide was worth his weight in gold by limiting the interaction with them in a polite way. I saw other tourists without guides getting bothered while we escaped a considerable amount of the no thank you conversation every few seconds. 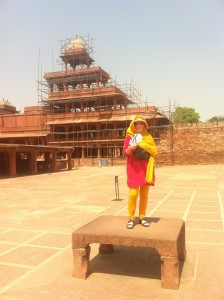 Where Akbar oversaw his chess games 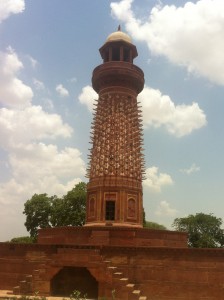 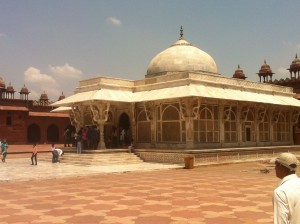 Inside the Mosque and the white tomb 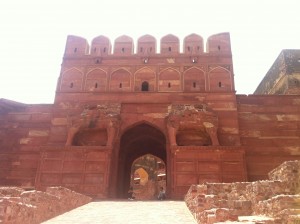 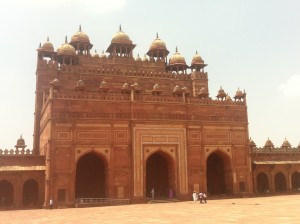 The biggest gate in the world 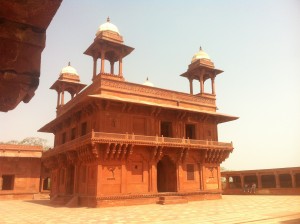 Tip One
We hired a guide and car in Agra from our hotel. It cost 4500 rupees and was well worth it. Our guide Pradeep had studied history and bought the different parts of the palace alive with his stories, telling us the history. He explained the history of each building that make up Fatehpur Sikri and the theories of why the capital was abandoned after just 10 years. The main one was lack of water. Pradeep also explained about Akbar’s colourful life and why he built the city here, Akbar even created his own religion a mixture of Islam, Hindu, Judaism and astronomy.

Tip 2
Take a bottle of water there is nowhere to buy any inside the site itself. We got a large one in the car park from a vendor for 20 rupees. An umbrella for shade would not be a bad idea if you are sensitive to the sun.

Tip 3
The site is split in two. Archeological India manages the palace and inside you are not bothered by vendors or beggars. It is very clean and I have written individual reviews about the temples, palace and other buildings in the complex on my tripadvisor page. Here is a link to one of them about Hiran Mirar the elephant memorial. There is a 250 rupees entrance fee.

Tip 4
After touring Akbar’s palace and other buildings be ready for when you leave the tranquility of the Palace. There is a short walk to the Mosque where you can see the white tomb and Buland Darwaza. I guarantee several people will come up to you selling their wares. Pradeep gently told them to leave us alone and that worked fine. He also warned us that pick pockets operated in the mosque. We had no problems. Entry to the mosque is free.

Tip 5
Our guide took us to a place to leave our shoes and we had to use dirty slippers to walk in the mosque due to the heat of the pavement. Bring some socks and a small bag to put your shoes in if you do not want to pay 50 rupees which included the use of dirty slippers. The room to leave your shoes is to the left of the entrance down some steps.

Tip 6
Once inside you can visit the white Tomb of Sheikh Salim Chisti which was busy when we were there. You also have to keep your head covered when going inside it. It is quite small with some lovely designs and does not take long to walk around. It also is reputed that people who make wishes here especially for babies are rewarded.

Tip 7
After taking a few photos of the gate known as Buland Darwaza go outside the gate and look at the view as well as back at the imposing gate. Below the gate is a village as well as the remains of the buildings they used to wash the elephants. Check out the horseshoes on the door, apparently Akbar had a horse with huge hooves and there is a horseshoe from that horse on the door, it is easy to spot among the other shoes.

Tip 8
I read up on the site and wanted to visit the site of the memorial to Akbar’s elephant. The elephant executed people by walking over their chests. The tower is a short walk down a path and called Hiran Minar with stone tusks sticking out of it. You also walk up to the tower through the elephant gate which has two damaged elephants facing each other on the top arch.

Tip 9
After viewing the tower you return the same way and go to between the two sites to a car park. Another mini bus takes you back to the entrance car park through a village. After visiting the sites we stopped on the way back for lunch lunch at the Ganepati Resort on the way back to Agra. We did not have the buffet lunch and stuck with a la carte. I have found that if you are going to get food poisoning that buffet food is sometimes the culprit.

Our visit took around 3 hours plus the 45 minutes each way car travel. We did visit all the sites at Fatehpur Sikri. On the way back to Agra ask your guide to point out the original mile markers that Akbar built. The markers are very impressive in size.