Debbie and I were married in May 2006 on the island of Zante in Greece. It was nearly a very short marriage and this is the story about our big fat greek wedding and how Debbie almost became a widow twice. I met my future wife on a blind date which she did not know about through our friends Mike and Brian in Brighton. They had tried to set us up twice before but we were unable to meet for various reasons and it was literally third time lucky. I was working in Amsterdam at the time and in Brighton for a short visit. A few years later after going back and forth to Holland many times we were on our way to Greece to get married. The decision to get married in Greece was because neither of us wanted to get married in our own countries, Canada or New Zealand. We chose Greece as we had fond memories of the country and wanted somewhere we both liked and Greece fitted that criteria.

Debbie initially tried to get the right paperwork for us to get married at the Greek Embassy, but hit a brick wall. With a week to go before we left for Greece we still did not have the correct paperwork. In frustration she gave up and allocated me the task to get the permit to marry. We spoke to our Greek friend Toli who suggested when I go to the embassy to just shout loudly who do I have to bribe to get the permit. This absolutely worked and we had out permit to marry.

It was not a big wedding party, close friends, Debbie’s mum and dad and a few of my relatives from Holland. In total we were on the island for two weeks. Prior to the wedding we enjoyed catching up eating, drinking and doing a ride around the island on a boat. We organised a wedding planner on the island, she was brilliant. Organised the meeting for registering the wedding the day before the official wedding. We needed to do this to make it official although I still have no idea what it says as it is all in Greek.

We choose the accommodation away from the main resorts at Limni Keri and stayed at a newly built hotel with a lovely pool. The hotel we stayed at in Lemni Keri was only a few minutes walk to the Marathia beach and several seaside restaurants.The owner also ran a taverna near the Keri Lighthouse near the town on top of the hill a few kilometres away. We got married at sunset on a cliff top near the Lighthouse.  The ceremony was in Greek and English with some traditional Greek touches such as lots of noise with a gun being fired into the air, sharing of honey and wrapped in a gauze sheet during the ceremony. 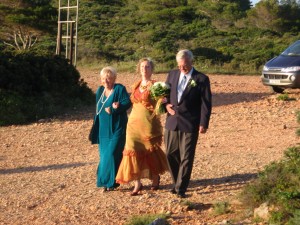 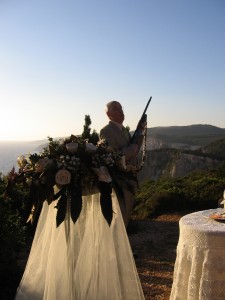 Waiting for my bride 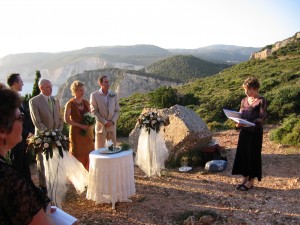 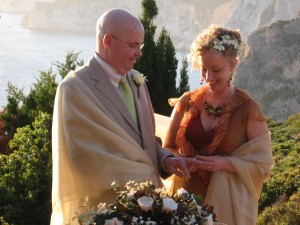 After the wedding we retired to the taverna with Greek dancing, music, great food, too much wine and lots of laughing. The taverna now has the claim to fame of having the biggest Greek flag in the world flying from a very large flagpole. See the website below for some great photos of where we were married. The views from the taverna are stunning. 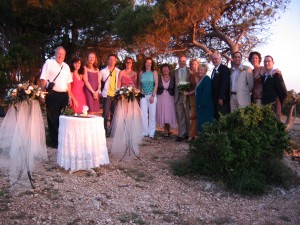 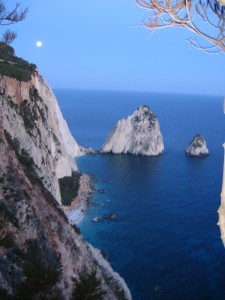 View from the taverna where we had the wedding reception 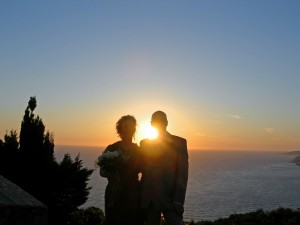 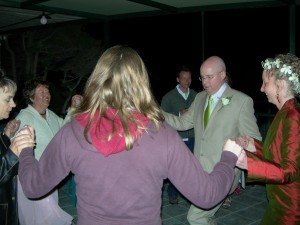 A bit of dancing 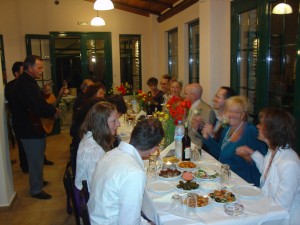 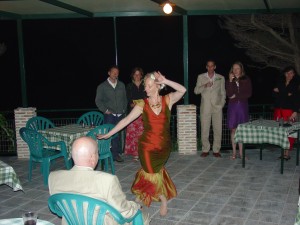 My bride dances for me

This was the first of three honeymoons, the second was in Africa and the third in New Zealand. We spent a few weeks just driving around the island and found a great place where we spent a week. The first place we stayed at I got an electrical shock from the shower and a few days later at another place the same thing happened in another shower. It must have been my lucky May as I survived both shocks and Debbie was not made a widow. Although it has made me extremely cautious around electric powered showers! I would recommend going to Zante in May if you can as it was not that busy or overrun by tourists.