I’ve landed back in my home town of Greater Vancouver.  It’s been a good 3 years since I’ve spent much time here, but I’m here for 6 months.

So, why I’m in Vancouver – because I hope to work towards working internationally. I’m taking advantage of having an agent in Vancouver and coming back to build that up better by being in situ.

As a result, I wanted to write about my 1st week, as it’s been just brilliant for all the small encounters.

Firstly, I arrive in Kelowna, well, Calgary, but then went straight onto Kelowna.  I wanted to try out the new connection between Westjet London and Vancouver, sadly, that part wasn’t so great.

I didn’t like having to pay for every little thing.  For me, I find I’m more tolerable about this on short halls than long halls. On long hauls, well, I am going to get hungry and thirsty.  I just don’t like the constant sorting of money or having a tab.  Pay up front. Which is what I chose to do, but even this could not be done until 48 hours before the flight.

I was not able to book my luggage until 24hrs before flight. Also, my seat and then at some point in this 24 hour period finding out I needed to have my own device to watch films on. Then, I had to set up an app to be able to use it on the flight. All this did not please me.

To be frank, the last thing I want to be doing is a bunch of last-minute flight details. I would rather sort this out when I book my ticket, not at the last-minute.

Then, I had a problem with my flight being delayed and catching my next flight to Kelowna.

We got there in the end, but my luggage was bumped to a later flight. The seat I had pre booked was reassigned, so I ended up on the last available seat on the flight I had booked. No one told me, they automatically had moved me to a later flight.  It was in the middle at the back of the plane – yuck! Plus, I had people waiting to pick me up at the other end and no way to contact them, as my phone is UK and the Wifi in Calgary, just didn’t work.

There was no communication about this change or that they would make this change at any point – not impressed!  As I did a marathon sprint around Calgary airport. To make that flight, which I can tell you, where we landed and where my next flight to Kelowna went from, were nowhere near each other. Just to add, I had to go through customs in between for just a bit more fun.

At least, I didn’t need to pick up my luggage at Calgary, as I would never have made my flight.  This is a new system they are just starting at the airport. This gets a full tick from me!

Quite a few bugs to work out in their new flights to London – don’t plan to book that way again. Too much fiddling and for what I feel was not much less money in the end.

OK, rant over about my flight, things are going well after that.

I had a great few days with my parents and niece. 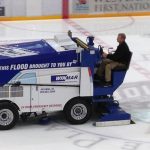 I made it to a Saturday night Junior hockey game of the local champs!  Couldn’t get better Canadian entertainment than this – we won, too!  It was fun to see the old Zamboni going round again.

This doesn’t happen in the UK. I got to go to the gym with my niece for free!  I was pleasantly surprised when I was able to go along for free!  Aces, Canada!

As I was 1st in Kelowna, I was in the fruit valley and guess what I got to do?

My brother’s home, where I was staying has an apple tree which is not picked much.

I went out and picked, plus made some delicious home-made apple sauce – yummy!

My favourite apple here is the MacIntosh, which, sadly, I can’t get in the UK.

I was so pleased when I went out to my parents place and managed to pick some off a neighbours tree.  Sadly, I forget them in my parents motor home – dang!  Still, I’ve been happily munching away on them since buying some at the local supermarket – scrum! 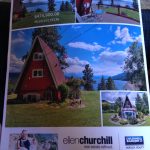 My parents place is For Sale!

1 little side, as I’m often saying to my friends in the UK, ‘Oh, my parents have bears walk through their garden.’  Well, when I was picking apples from my brother’s tree, seems I wasn’t the only 1. 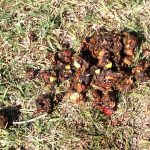 Some fresh bear scat was there – pleased that my brother’s dog was with as my bear alarm!

Joys of living where the bears are. 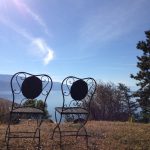 Both my brother and parents live in places which would be seen as quite remote in the UK.

I love them for their naturalness.

My parents place (which is For Sale, if anyone is interested!) have a spectacular view of Okanagan Lake and you can see the lights of both Kelowna and Vernon.

My brother has to truck water in, as they aren’t on city water, only well. They need to bring it in to meet their demands.

Plus, he has a log fire stove which heats the house, so every year he has to chop logs to make sure they have enough for the winter.  I love log fires and campfires.

I just love it, but then, I don’t live it everyday.

I’m used to my creature comforts of tap water and heaters.

Vancouver is back to my creature comforts, but there is a marked difference to my life in the UK. 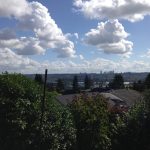 Room with a view

For starters, I was walking in a park in New Westminster and people will smile back and say ‘Hello!’  This is not such a frequent occurence in big cities in the UK.

Also, its commen practise to yell, ‘Thanks’ to the bus driver every time you leave the back of the bus.  They, also, say ‘Hello’ and sometimes ask how you are!  I’d forgotten all these nice gestures.

In fact, at the Skytrain – like the Tube in London or the Metro in Paris, I had a staff member come up to me on a late Sunday afternoon. My confusion quite apparent. 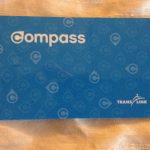 She showed me how the new Compass card system works and went into great detail of how it worked – what my best options would be and how to sign up online to make sure I didn’t lose any money off my card should it get lost or stolen – Wow!  Love that customer service.

My 1st place I stayed was at an Air BnB in New Westminster – I got a beautiful room with a view over the Fraser River.

I had lovely chats with the Croatian immigrant, Suzanna, who I have to say is a real inspiration. She arrived in Canada with no money and is now managing to leave her job, in the care system, to run her various properties.  She is a real turn around sort of person and I love that about Vancouver and BC.

I love the mix of cultures which is always permeating the city. This is not always so welcome with others who have been born and raised in the city.

I love the diversity.

It’s 1 of the things I’ve always loved about Vancouver is it’s openness to allowing the freedom of cultures.

My Mother comes from Austria, so I’m quite proud of the fact of a mixed heritage background.

Plus, growing up in such a great place where bears can walk through your garden. 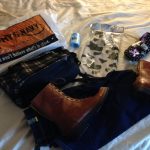 Another find in New Westminster was the old Army & Navy store.

It brought back days when I would go shopping with my Mom for school outfits.  Recently, I was reminded that it’s the best place to go to buy jeans. As you are pretty much guaranteed to find jeans that fit and for a reasonable price.

I bought a great pair for $25 – Yes!  It was like walking down memory lane.

It was a good place to buy a cheap back pack as well. Looking elsewhere for a school style back pack, they were starting at $35. I have to say, in the UK, you can get the same thing a lot easier and cheaper. I managed to find 1 for $15 at the Army & Navy – bingo! 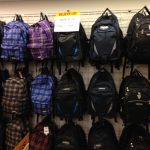 Back Packs as far as the eye can see…

Big thanks to Mom for all those times she dragged me around there when I was a kid.

After all this walking and shopping, I needed food. So I went off to the new Key at New Westminster and had a lovely meal in a bowl. The waitress warned me, I would need a doggy bag – she was right. I love doggie bags – 2 meals for the price of 1! 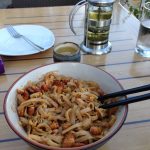 The other thing that happened at this lovely restaurant on the Fraser River was, I decided when I sat down it was still warm enough to sit outside. It got cooler and they offered myself and the other couple outside blankets – lovely!  Plus the friendly couple shared a blanket moment with me – love that when that happens and I’m travelling alone.

Also, it’s just standard to get a glass of water.

This is a biggy for me, they don’t charge for extra hot water for my tea!

I’ve had this happen several times in the UK, which really gets my goat.  It’s not like coffee, which, I have to say, many places here offer bottomless filtered coffee – so UK, you really could learn to be better at this.

I do have 1 complaint about the teas I’ve bought or tried here, that is, the tea bag can only really be used once.  It just doesn’t have the staying power of British tea bags, where you can get more than 1 cup from a tea bag.  So it’s all about what ya get and where.

Maybe we could find a tea utopia where we can get leaf tea with bottomless hot water – paradise!

Just to end my time at New Westminster, I observed on a Sunday afternoon at the key they have a circus school for kids. How cool is that?!

To round it all off, this 1st week took me through 4 cities (Brighton, London, Kelowna and Vancouver) and 2 countries (UK, Canada). I got to play cribbage with my family and go to Costco for my 1st shop.

Ahhh, I feel I am slowly getting settled.

I’m just a little duckie waiting in the park for my next adventure… what’s yours? 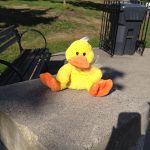