‘While one person hesitates because he feels inferior… the other is busy making mistakes and becoming superior’ – Henry C. Link

This week has been a lot about going back and forth between Banff and Calgary, Alberta. We’ve been through snow storms

Mickie enjoying the tall grass and return of warm weather.

The seasons are, definitely, changing.
So, why back and forth between these 2 cities? – Well, like all great ideas, you hit some hick-ups and this week was one. John, who has New Zealand and Dutch passports) got the wrong US visa – an Esta – it’s free and, for most, this would suffice, but because we plan to be in the US longer than 90 days (it doesn’t reset if we go into Canada or Mexico) he needed to go to the US Embassy in Calgary to get a B2 Visa. Only problem was we had 2 snow storms which hit the region – one, the worst of the two – the day we needed to drive to Calgary from Banff. So snow storm or not – we had to go in for John’s early morning, next day, appointment. Thankfully, my parents could hold up in Banff – nice and snug in the motor-home,

while we went to a friend’s place to stay for 2 nights in Calgary.

Then back to Banff for a few days and, then, one more in Calgary, so my parents could catch up with their friends, too.

So we had walks in Banff round trails, discovered the Cave & Basin hot springs

[I’ve been to Banff many times and never been to this birthplace of our national parks! (if you want to watch a couple of silly videos of John and I click here and here)], almost, got charged by a male Elk in rutting season on one early morning snowy walk, saw a herd of Elk, seen tons of ‘chippies’ (chipmunks), squirrels, birds and deer, but no bears – sadly – not this trip, maybe the snows chased them into their dens early.

Just to add to the list of what I did: got to a play in Calgary – ‘One Man, Two Guvnors’, which I’ve wanted to see and was a good laugh, plus, it was based in Brighton!, sat in a hot tub and the gorgeous hot springs in Banff, saw endangered snails

Can you spot 3 dragonflies in this photo?

– only in Banff and saw fish, which one sign said were extinct, but clearly weren’t. For the first time, I feel, I got to know my neighbouring province a lot better and despite all past rivalry – really liked it.

Calgary is a hot spot for sunshine all year round – who of you knew that?!

PS: I forgot to mention the Moraine Lake, Banff, absolutely beautiful and the picture which used to be on the back of the old Canada $20 bill.  Definitely worth a visit, check out the feature image and these below: 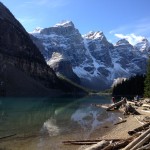 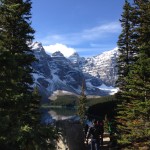 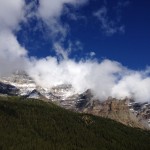 Moraine Lake and the mountains surrounding it. 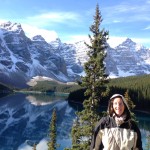 Me at Moraine Lake 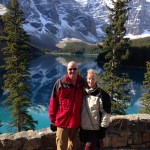 John and I at Moraine Lake 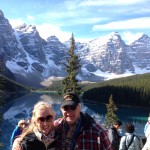 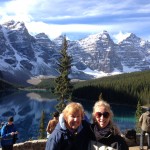 Mom and I at Moraine Lake