During our month in Florida we were lucky to enjoy a seven-day West Caribbean cruise on the Norwegian Sun. The cruise was with Debbie’s family including her Mum, Dad and brother, Tim, who flew in from Kelowna to Tampa with his wife, Teresa, and their children, Cameron and Chelsey. The cruise departed Tampa for seven days stopping at Roatan Island in Honduras, Belize and Mexico with stops at Costa Maya and Cozumel with a few days at sea.

The Norwegian Sun was built in 2001 and accommodates up to 2000 passengers. Our cabin on the 8th deck was surprisingly spacious and it was nice to sleep on a real mattress for seven nights. The one thing you will never do on a cruise ship is starve. Whenever you want there is food and it was good. We avoided the speciality restaurants as they all added a surcharge and we were happy to eat at the regular restaurants. The one thing that a cruise ship does is add extra costs, tips are US$12 per day per passenger in a cabin and if you get a drink they also add-on a tip automatically. WiFi is just a ridiculous price so we did not use it and, when on shore excursions, we were, always, able to find free wi-fi and check our emails. Entertainment was ok, we liked the silly interactive quiz shows for couples, which were hilarious.

On the second night they had a newly wed couple who had to answer questions about their spouses favourites. One question was what was your husbands favourite condiment, she said hot sauce. However, when the host asked the husband he misheard condiment and hesitatingly said Trojan. Well, I laughed. There, also, was a brilliant ventriloquist, who was very funny. The dancers and the singers were OK, but some of their voices sounded like they had sung too much. The overall staff was excellent as you would expect on a cruise ship. The hot tub on deck always busy, but not to hectic. Pool was ok.

Debbie takes a go at the wheel

Roatan Island is 77 kilometres long and 8 kilometres wide and the largest of three islands off the Honduras coast. Roatan’s claim to fame is it is on the southern edge of the Mesoamerican Barrier Reef System the second largest in the world after the Great Barrier Reef in Australia. We did not use any of the ships shore excursions from past experience we have found them always overpriced and too crowded. Instead, we were lucky that Tim, Debbie’s brother, organised all the shore excursions privately. We used Bodden Tours on the island which we each paid $25 for the day. Kenny the driver was excellent and drove us around to West End beach where we visited places with monkeys and birds. The main thing to do on the island is to snorkel, dive and swim. He took us to a place where we had lunch, swam and enjoyed the beach. Of course, the only problem with that is that every other person on the cruise ship is looking to do the same thing. We were lucky to eat at a hotel with a great swimming pool not far from the beach where no one else was and enjoyed some solitude and swims there.

Had him eating out of my hand

On arrival at Belize we had to use a tender or another boat to get to shore which was fun. Again, we were met by a private tour company operator, Charlie Chans, and driven to the caves. After an informative walk where our guide Roberto told us about the plants, history and showed us a tarantula, we reached the point of departure. You are given lights, but they are not that strong, however, you do still see the caving system as you float through it on a comfortable inner tube. I learnt very quickly not all inner tubes are created equal. Some of the other tours tubes had no netting on the bottom or back rest like ours did. It was nice to lean back and enjoy the scenery.

The drive to the caves is over an hour with the last part along a road built by the Mayans and not maintained. On arrival, you are in a staging area with hundreds of other cruise passengers on different tours. It was chaotic and busy. Here, we, also, appreciated the private tour, as you have to leisurely walk around 45 minutes to the start of the inner tube ride. Our tour company arranged for the tubes to be at the end of our walk and near the cave entrance, other tours did not. If you want a solitary experience this is not for you, as there were hundreds of people. There is no system or order on who goes first, so it was crowded, as you can see by the photos. We had a lunch at the end and, then, a cocktail and beer on the pier waiting for our tender before heading back to the ship. You, also, can do zip lining, but we did not. We used Charle Chans tour company in Belize and it cost us $50 each, including lunch.

Enjoying the ride to the cave

The clan before the tubing

Debbie and the tarantula

So glad we did not have to carry our tubes!

Celebrating Belize with a couple of cocktails

This was my favourite stop. After leaving the ship, we walked to the offices of Native Choice Tours. Our guide, Diego, was excellent and we had a wonderful day seeing the Chaccobean Mayan Ruins before the hordes. Then, we enjoyed a great Mexican lunch at the Bacalar Lagoon Resort where we, also, relaxed in the sun and swam in the lagoon.

It is around a 50 minute ride to the Mayan ruins, where we were the first tour group of the day. Our guide, Victoria, was excellent and the ruins were amazing. We had time to do a bit of shopping at the end. Then, on to Bacalar Lagoon, where we had a great lunch and I enjoyed the open bar with several margaritas. We used the free kayaks and swam after lunch. It was great value for $80 each, which included entrance to the ruins, lunch and an open bar. It was excellent value compared to the shore excursions offered by the ships. The ship tour charged around $169 just to visit the ruins.

The Bacalar lagoon resort with hardly anyone there it was blissful

We opted not to do an excursion today. Although, Tim and family did go diving and had a ball, as well as, they saw a sea turtle. I did go offshore for an hour or so, but it was periodically raining and there were six other cruise ships in port, so it was pandemonium. From what I saw, I need never go back to Cozumel. Instead, we had a relaxing day on ship. 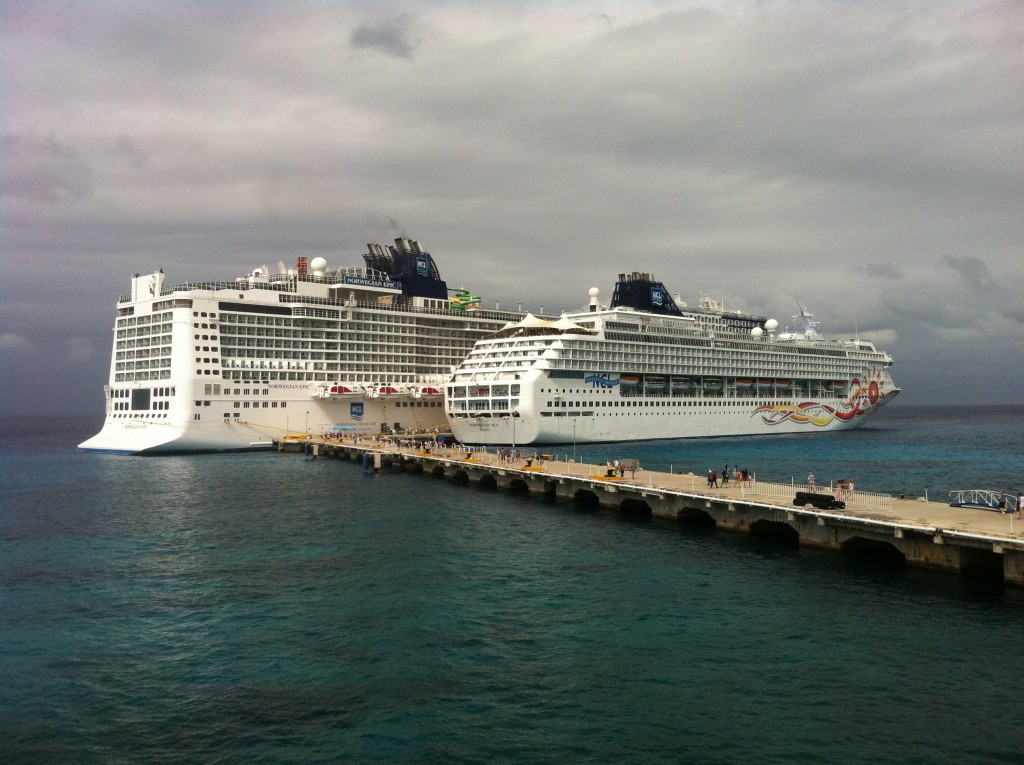 Two NCL ships, we are the baby one

We had another great day at sea, ate too much, enjoyed the hot tub and I even saw a dolphin chase the waves of the ship for a short period. We, then, had a lovely family dinner meal. After disembarking, we returned to where we stayed the night before the cruise, the Tahitian Inn. They looked after our car for free. We had a lovely lunch and said adieu to Tim, Teresa, Cameron and Chelsey, who returned to Kelowna.

I have to admit I do like going on a cruise and, hopefully, we will be doing another one soon.

Aunty Debbie with Cameron and Chelsey

Tim, Teresa and Inga enjoying our last dinner on board

2 thoughts on “West Caribbean Cruise: From RV to Ship”